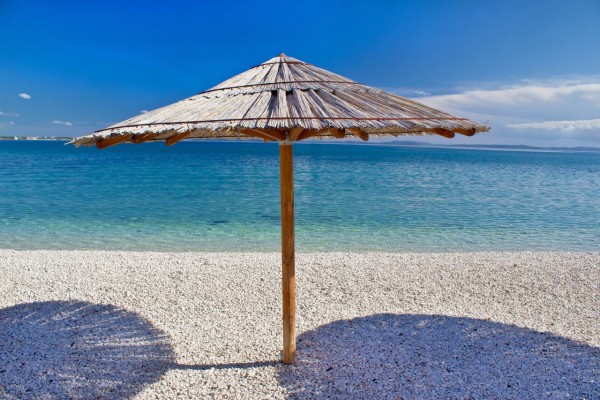 Running alongside the Adriatic Sea is the awe-inspiring naturally-occurring geographical features, culturally-enriching cites and beautiful beaches of Croatia’s coastline. With over 1,246 islands, inlets and isles, Croatia boast's over 5,800km (3,600 mi) of coastline. Here, we give you six places to explore Croatia from the coast.

The pretty town of Vodnjan, located in Istria is one of the most ethnically diverse settlements of the country, creating a unique blend of cultures, architecture and experiences. This quiet town is slightly off the beaten track, perfect for holidaymakers who want to experience authentic Croatia and want to immerse themselves in the local culture.
The town has managed to preserve its historical roots, characterised by a medieval appearance with winding streets providing a quaint infrastructure around buildings of Gothic, Venetian Renaissance and Baroque styles. The epicentre of the town is the People Square, denoting the old site of the town’s castle – pulled down in 1808. Be sure not to miss the six mummified saints, at the Church of St. Blaise.

The world famous Dubrovnik is a historic maritime town, which has evolved into one of the most popular tourist destinations in the Mediterranean, attracting millions of tourists every year. The city started widely attracting tourists in 1897 when the Hotel Imperial was constructed and remains popular thanks to the charming architecture and construction, earning it a place in CNNGo’s 10 best preserved medieval cities in the world.
We first visited the old port 15 years ago, and am amazed that it now accepts many of the world’s biggest luxury cruise liners. For the best views of the coast be sure to walk the city walls.

The largest of Croatia’s coastal cities; Split is located towards the south of the country on a peninsula between the Gulf of Kaštela and the Split Channel. The ancient Diocletian’s Palace is one of the city’s most popular and prominent visitor sites. A UNESCO World Heritage site; the eponymous palace was built in the 4th century by Roman emperor Diocletian and housed his military garrison.
Modern Split is enjoying something of a renaissance since the turn of the 21st century with many new hotels and visitor sites being erected. It also makes one of the best places to head to if you plan to explore Croatia's islands.

Pag is Croatia's fifth largest island and is developing as a popular tourist destination thanks to beautiful bays, beach and the bustling nightlife. Zrce Beach on Pag has developed a reputation as a partygoer’s paradise with parties like Zrce Spring Break, Hideout and Sonus Festivals growing in size each year.
For those looking for a more relaxed retreat, the rest of the island is mostly made up of small, charming villages offering a true insight into authentic Croatian life, as well as the most wonderful cheese known as Paški Sir that you have ever tasted.

With a population of just over 4,000 people; the small size of Nin belies the historical importance and cultural significance of the town. The traditional seat of the Princes of Dalmatia; the historical centre of Nin is only 500 metres in diameter, but what it lacks in size it makes up for in beauty.  The tumultuous history of Nin has seen it develop into a popular destination for visitors, looking to explore the interesting Dalmatian, Ottoman and Roman empires.Close by to the old town is a church, Sveti Nikola on a small hill that is a must-see spot for photographers.

How do you get between these cities you ask? Contact Octopus Transfers all of your intercity and airport transfers across Croatia.